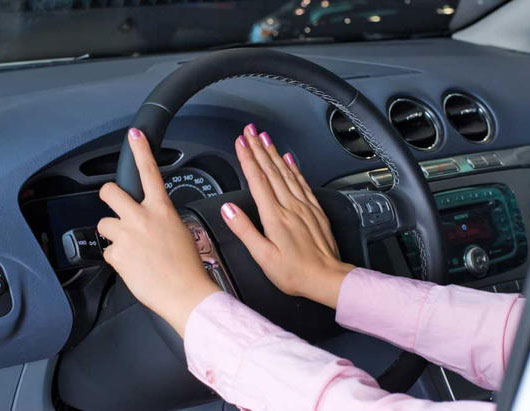 Pulling up outside a restaurant or fast food outlet, honking the horn and having to wait for the waiter to come out to take your order could soon be a thing of the past, thanks to an ingenious new system devised by linguists in Doha.

Using the Lewis Code, the result of three years work by a team at the Qatar Service Industry Institute, customers will now be able to place complex orders using just their car horns.

“We began with the basic dot and dash structure of the Morse Code and applied it to the needs of the average regional consumer,” said lead researcher Dr Bruno Winkler at the unveiling ceremony yesterday. “So, whereas with the Morse, a single dot is the most popular letter, e, with our system a short blast on the car horn is a double multi-whopper cheeseburger with large fries.”

Over 800 different ordering options made up of short and long horn beeps are included on the Lewis Code, claimed Winkler.

“For example, a waiter trained in Lewis would understand that you wanted to order a super-sized family chicken bucket with a long beep, or a small green salad with six short beeps, three long beeps, seven short beeps, eleven long beeps and a final short beep,” he said.

The Lewis Code is currently being rolled out across 500 restaurants as part of the initial phase, with a further 2000 set to be added depending on the results. Menus with horn combinations will be delivered to all drivers in the coming weeks.

The announcement of the Lewis Code comes amid a rise in reports of people risking their health by leaving the secure sanctuary of their cars and walking into restaurants and groceries, rather than beep their horns to attract attention.

“We hope with our system we can avoid any further incidents such as this,” added Winkler.