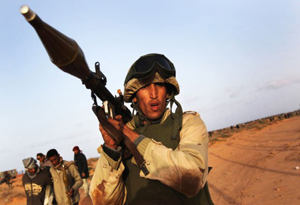 TRIPOLI: Western governments were said to be in a state of shock last night after a new report revealed that if you arm a bunch of unknown, possibly dodgy criminal types, and give them air support to overthrow a government that, while far from perfect, was probably not much further from perfect than some of the lunatics overthrowing it with air support, they turn out to be a bunch of dodgy criminal types with loads of guns and sudden Western-bestowed legitimacy.

Speaking to The Pan-Arabia Enquirer, Harry Al Belfontaine, US Ambassador in Tripoli and vice president of an oil company with a surprising vested interest in the newly liberated Libya said that he hadn’t expected this at all.