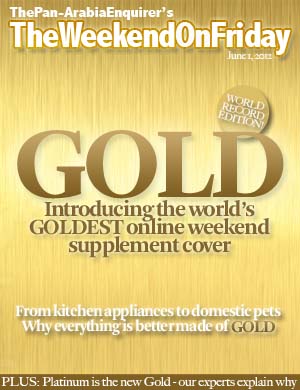 This weekend’s issue of the popular Weekend on Friday magazine by The Pan-Arabia Enquirer has become one of the most sought-after supplements in publishing history, featuring a cover that has officially been recognised as the “goldest ever made for an online weekend supplement magazine”.

Specially created using images of nearly five kilograms of 24-karat gold, the sparkling cover weighs in with an eye-popping estimated value of almost $150,000.

“We were asked to produce something special for their next issue,” said UAE-based jeweller Elisabeth Duke. “We had a few ideas, but when they told us that it was going to feature several stories about gold we all agreed what we should do. Making the world’s goldest cover just seemed like the obvious choice, and we’re absolutely delighted with the results.”

The magazine will eventually be auctioned off for a local charity.

See the $150,000 magazine cover in all its record-breaking glory here.