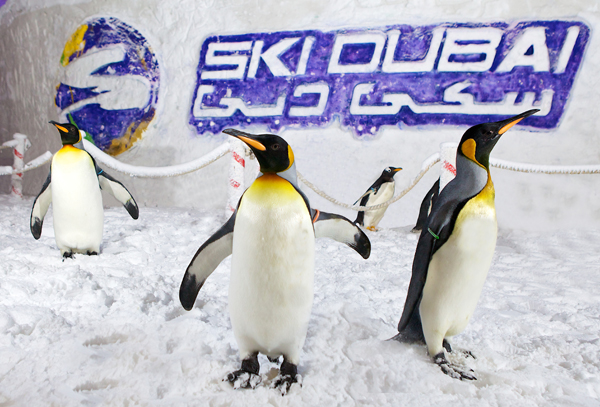 Squeaky the penguin, one of the main militant unionists behind the strike, yesterday.

DUBAI: The strike at Dubai’s penguin enclosure entered day three this morning, with the two sides still unable to agree to new contract deals that would see the Antarctic animals return to their posts.

The standoff between Ski Dubai and the 20 snow penguins – who only arrived in January 2012 – began two days ago, when a King Penguin by the name of Squeaky refused to take part in the hourly ‘encounters’ with visitors, citing issues with pension contributions. By lunchtime, the discontent had spread to the rest of the herd and the afternoon ‘March of the Penguins’, in which they take part in a procession around Ski Dubai, had to be cancelled.

“We’ve got a fresh batch of Atlantic sardines arriving this afternoon which we hope will bring the penguins back to the bargaining table,” said a Ski Dubai official, adding the facility was considering “rounding up all the dwarves working in nightclubs around town and sticking them in penguin outfits”.

You may also like...
Related Topics:dubai, mall of the emirates, middle east, penguins, Satire, ski dubai