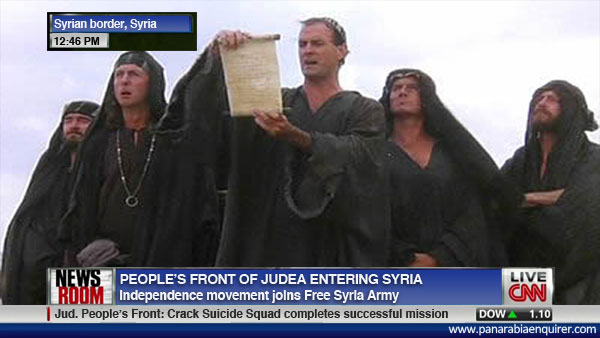 DAMASCUS: Middle East experts were last night predicting the swift downfall of Syrian president Bashar al-Assad, following the announcement that the People’s Front of Judea was joining forces with the Free Syrian Army.

“We, the People’s Front of Judea, brackets, official, end brackets, do hereby convey our sincere fraternal and sisterly support to the Free Syria Army in its fight against the illegitimate and inhumane Syrian government, which we hate almost as much as the Judean People’s Front. Splitters,” a spokesman for the group said.

The news came shortly after arch-rival independence faction the Judean People’s Front claimed that its Crack Suicide Squad had carried out a successful mission near Damascus.