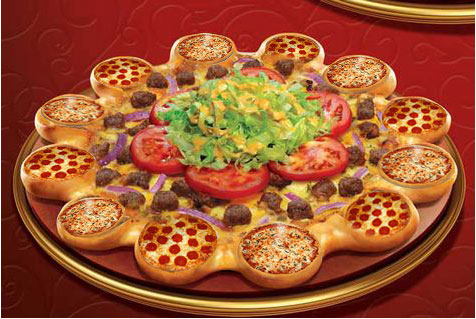 Fast food chain Pizza Hut has unveiled what it is describing as the ‘ultimate tribute to Italian cuisine’. The Pizza Hut Pizza Crust pizza, which was created especially for the Middle East and will be available across its GCC restaurants from tomorrow, features an extra-large pizza with mini pizzas covered in a variety of toppings built into the crust.

“Following on from the tremendous success of our cheeseburger-crusted Crown Crust Pizza, we put our best culinary minds together and asked them to come up with the next delicious dining extravaganza,” said Pizza Hut regional marketing director Sasha Blunderbuss. “The Pizza Hut Pizza Crust is a culmination of several months of hard work.”

According to Blunderbuss, the Pizza Crust has been designed to appeal to families who can’t decide on a particular topping, allowing everyone to get what they want.

“But, let’s be brutally honest, it’s mainly going to be eaten by our more generously proportioned guests who simply want to enjoy a wide range of pizzas in one sitting,” he added.

While the Pizza Crust is yet to hit stomachs, there are already plans to expand the creation.
“Our chefs are currently working on pizza crusted with pizzas that are themselves crusted with cheeseburgers.”