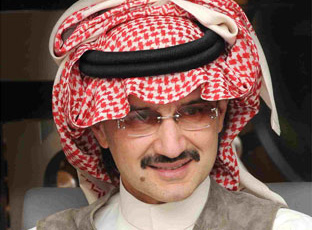 RIYADH: Having already made the shocking revelation that his multi-billion dollar empire began in a tiny shack near Riyadh, Prince Al Waleed Bin Talal has now spoken out for the first time about his early years working in a British coal mine.

In an emotional interview to be broadcast on MBC tomorrow, the Arab world’s richest man recalled a youth spent working “down the pits” and enjoying few of the luxuries he has today.

“Some weeks we’d get nowt but a piece of coal. And not good coal – the bad stuff they couldn’t sell. I’d take that home to the palace and we’d share it out between 15 of us. But we were happy,” he said, wiping his eyes on a diamond encrusted handkerchief carried by a team of porters and delivered via its own personal helicopter.

“Back then, I’d have never have dreamed about owning a fleet of jumbos and kitting them all out with panda fur and Jacuzzis and gold like I do nowadays, it were just about making ends meet.

“People used to say, ‘Waleed, lad, you’re meant for more than this.’ But down at the colliery, I were just one of the lads.”

Al Waleed’s astonishing rags to riches story is soon set to be dramatised for the silver screen, with George Clooney to play the prince in a multi-million dollar production by Rotana, owned by Prince Al Waleed.