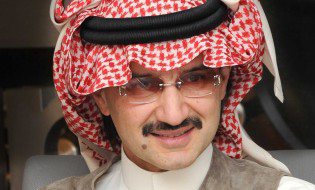 RIYADH: Prince Alwaleed Bin Talal has insisted that his new fortune following the floatation of Twitter won’t change him as a person.

Two years ago the Saudi multibillionaire invested $300 million in the microblogging platform, an investment that is likely to be worth significantly more after an IPO that has subsequently valued Twitter at around $25 billion.

“Sure, it’s incredible that from this tiny little seed I planted a tree may now have grown, but I’m not going to let this new wealth affect my life at all,” said Alwaleed, who flies around the world sat on a gold throne in a customised private Boeing 747.

Despite the sudden increase to his assets, Alwaleed admitted he has no plans to move from his home, a modest 250,000 square metre 317-room palace featuring three swimming pools, four kitchens and a 45-seater cinema.

“I might give it a new lick of paint here and there, you know, perhaps install another cinema or wing or something, but I’m not going to be rushing out and getting myself a fancy new sportscar or anything,” said the man who has ordered a new 173-meter $500 million superyacht, which would sit alongside his current 85.9 metre boat.

“I’m sure it’s easy to let the money send you into a spin, but I’m definitely going to try to keep a level head,” added Alwaleed, who earlier this year said he would pursue legal action against Forbes magazine over claims it underestimated his wealth by $9.6 billion, putting him in 26th place in its annual Rich List rather than in 10th.

“But really, it’s just nice to have that security for my family.”