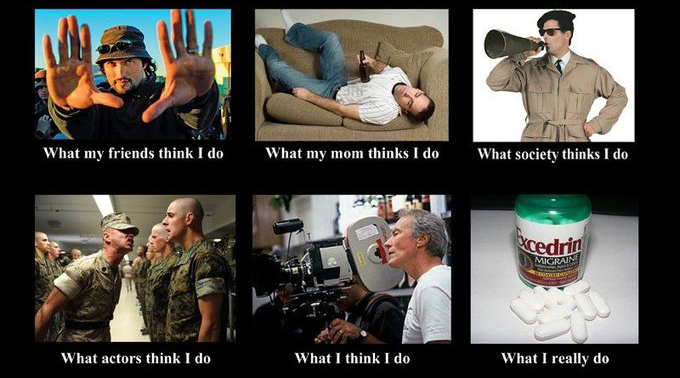 Radical Saudi cleric Sheik Hassan bin Wajani issued a fatwa against an internet meme yesterday. Bin Wajani, winner of the ‘Radical Cleric of the Year’ award in 2007, issued the religious edict against the recent spate of Facebook-friendly memes which show a series of visual charts depicting a range of preconceptions associated with a particular field of occupation or expertise, including ‘what my family thinks I do’, ‘what my friends think I do’ and ‘what I actually do’. Experts have suggested that since it first emerged online in early February, each subsequent adaption of the popular internet viral phenomenon has been at least 145% less funny.

“It was getting f****** ridiculous,” said the firebrand cleric in his daily podcast broadcast yesterday evening. “Every f****** time I would go onto f****** Facebook, some d*** would have put up a stupid f****** thing on my wall about what it was like being a f****** linguistics major, model booker or radical cleric or something followed by a load of f****** LOLS.”

The move comes just three weeks after fellow radical Saudi cleric Sheik al-Vac issued a fatwa against the numerous adaptations of the ‘Sh*t Girls Say’ YouTube video, rumoured now to have passed the one million mark.

Sheik Hassan bin Wajani is no stranger to fatwas, issuing an average of three a week since he first burst on the scene in 2001 with his famous religious edict against manufacturers of alarm clocks. Now focusing his attention on pop-culture, over the past year he has famously issued fatwas against Rebecca Black, Pippa Middleton’s bottom and Angry Birds, specifically the second to last level on the Rio edition of the popular iPhone game.