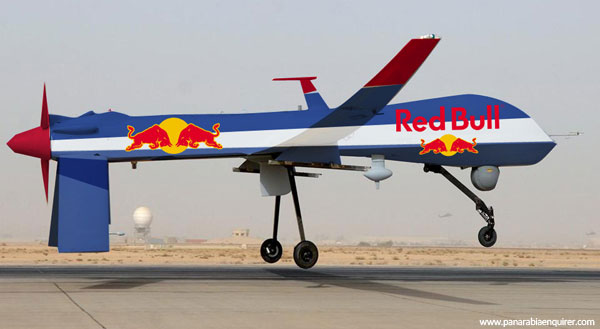 WASHINGTON: The Pentagon has announced a groundbreaking sponsorship deal with Red Bull, which will see the US military’s fleet of unmanned aerial vehicles branded with the energy drink’s distinctive livery.

“Sponsorship is an effective and mutually beneficial way of supplementing America’s defense budget,” said the Pentagon’s Edison Parkfast. “Thanks, Red Bull, for giving real ‘wings’ to our drones!”

“We are delighted to contribute to the war on terror,” added Red Bull spokesman Max Heimler. “Red Bull always seeks to take life to new extremes – whether it’s on the racetrack, at the edge of space, or over remote Afghani caves sheltering suspected terror cells.”

The new Red Bull-branded drones will be deployed from the beginning of next month. Rumoured future deals with KFC and IKEA are yet to be confirmed.