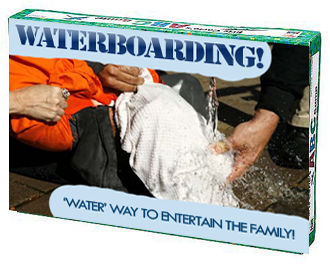 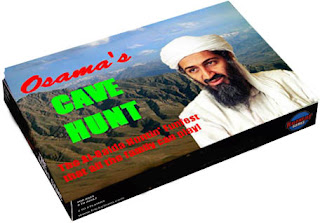 OSAMA’S CAVE HUNT
From the makers of SADDAM’S SUBTERRANEAN HIDEAWAY comes this Al-Qaeda themed game of skill and luck, which promises to turn boring afternoons into TORAH-BORAH afternoons! Roll the dice, answer a War On Terror general knowledge teaser then flip the trapdoor on one of over 70 ‘caves’ to see if Bin Laden is hiding inside. You’ll be helped – or hindered – along the way by grainy video footage of the man himself taunting you, courtesy of Osama’s special Death to the West DVD (not included). But hurry before your defence budget runs out!
For up to 12 players, ages 8 and up. STOCKS MUST GO – NOW REDUCED TO $30!

OPERATION (Ashrafiyyeh Edition)
It’s the zaniest game of the season! All you need is a steady hand and a little patience, and you can successfully remove a whole range of unsightly defects from our youth-seeking Lebanese patient! Can you use your tweezers to strip subcutaneous fat from her bulging thighs? How about shave a ridge from that Levantine nose? Or pump up that sagging lower lip using the flab from those ghastly upper arms? Growing old disgracefully has never been more fun!
Sized 12 and up. Now just $4,000! 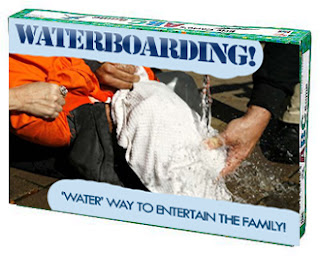 WATERBOARDING!
Make a splash with this fun-filled game, inspired by the popular interrogation method. A twirl of the Guantanamo Victim Selector determines which one of your family and friends will be facing a fiendish set of general knowledge questions, from the comfort of the vari-angle Truth Plank (supplied). Get one wrong, and ‘water’ shock you’ll be in for! Includes special branded towel, bucket, and DVD.
For up to four players, ages 6 and up. Now just $15!

HOTEL (Arabia Edition)
The popular 80s board game gets a 21st century, Arabian update! Start with a scruffy Bahraini 1-star brothel, attract the punters and build up your business. Compliment your hotels with some incredible amenities including a mall, aquarium and even a gold-plated giant panda enclosure! Will you reach the top rung of the industry, a 26-star underwater hotel off the coast of Doha, or will you lose your money, unceremoniously sack all your staff and flee back to Europe with a pile of debts behind you? It’s up to you!
For up to three players, ages 8 and up. Now just $50!