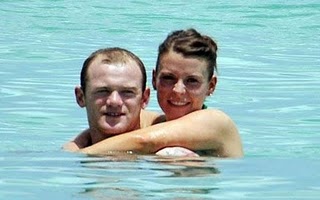 DUBAI: A leading tourism executive in Dubai has praised the decision by Wayne Rooney and his wife Coleen to use the city as the location to settle their recent relationship problems.

“Whether he wants to get down on one knee, or apologise for a string of extra-marital affairs, today’s Premiership footballer will find every resource he needs in Dubai,” Khaled Stacey, vice president of the Department of Dubai Promotions, told The Pan-Arabia Enquirer yesterday. “By flying out to Dubai, the Rooneys have given themselves the best chance available at making their relationship work.”

Stacey pointed to a 100 per cent success rate in Premiership marriages reconciled after a holiday in Dubai.

“Just look at Peter Crouch and John Terry. Both of these footballers were outed as dirty cheating dogs and facing relationship meltdown, but a luxurious break in a five-star beachside Dubai resort soon helped their wives realise that everyone needs a second chance,” he said, joking afterwards that he’d “like to see that happen in Benidorm”.

Stacey made these announcements at the launch of Dubai’s new ‘Make-or-Break Break’ holiday package, specifically targeted at footballers looking to win back the hearts of their partners after playing away from home. Alongside secluded rooms and private beaches, Stacey said the package includes the sort of things he hoped would impress downtrodden WAGs, including spa treatments, beauty therapy sessions and meals of chicken nuggets and pink champagne. “And with our diverse migrant workforce, there are plenty of opportunities for casual racism, ” he added.

Stacey also used the launch to slam Cheryl Cole, claiming that her quick decision to divorce Ashley Cole without even attempting a Dubai-based reconciliation holiday had taken his department by surprise.

“Ashley romantically proposed to Cheryl in front of the world’s cameras on one of our intimate private beaches, so naturally when we heard he’d been cheating we expected to welcome them both back,” he said. “We were shocked and saddened by Cheryl’s rash decision to immediately separate without even one weekend of pampering in our glorious city.”