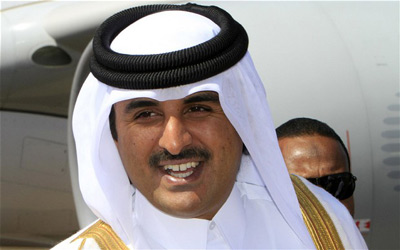 DOHA: In what he described to reporters as his “dream job”, Sheikh Tamim bin Hamad al Thani yesterday accepted the role of emir of Qatar in a special ceremony held in Doha.

Speaking to the assembled press, the 33-year-old – the youngest emir ever to take the reins of the Gulf country – said he was “honoured and privileged to be taking control of such a prestigious and successful gas-rich state”.

“When my father first seized power in a bloodless coup almost 20 years ago from my grandfather, I never thought in a million years that one day I’d be standing before you as emir myself,” he said. “This is really a dream come true.”

Tamim, considered something of a wonderkid among Gulf leaders, had reportedly been tipped for the top job over two years ago when the outgoing emir Sheikh Hamad had reportedly begun looking for a successor.

“Hamad had his eye on Tamim after watching him in a meeting as deputy commander-in-chief of the armed forces,” said a source. “[Tamim] put in a sterling performance, and Hamad saw right then that there was definite potential.”

Sheikh Hamad bin Khalifa al Thani sensationally revealed last week that he was stepping down from the emirship of Qatar after 18 years at the helm. The move was greeted with dismay from many fans of the island state who had watched him successfully lead them from near obscurity to a dominating force in the Arab League.

Among Tamim’s first roles in charge will be maintaining Qatar’s alliance with the West while at the same time pursuing an activist stance in Syria and other countries.

“It’s not going to be easy for anyone to step into Hamad’s sandals,” said Gulf political analyst Dexter Whitebait. “But Tamim seems to have all the skills needed to succeed, plus several hundred bazillion dollars at his disposal, which might also help.”