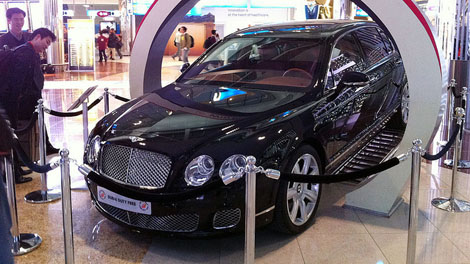 DUBAI: Shockwaves we being felt across the world yesterday after an airport in the Middle East announced that someone had finally entered one of those rubbish competitions to win a car.

The individual, believed to be a Russian man in his 40s, is reported to have entered the competition in Dubai International Airport’s Terminal 1 some time between 2pm and 4pm yesterday afternoon before boarding a flight to Moscow.

“It was incredible,” said Muriel Fernandez, who works in a stall selling traditional Chinese-made Emirati souvenirs nearby the car competition. “In all the 10 years I’ve been here I’ve not seen a single person even bother to enter and then this guy just walks up and, well, it was quite a sight.”

The move is thought to have taken the two promotion girls who have been manning the competition without any interest for the past five years completely by surprise.

“I’m not even sure if this model of car is still available,” one commented.