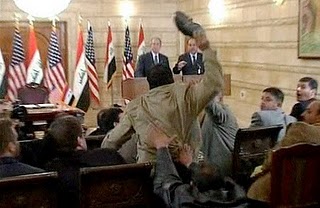 BAGHDAD: Muntadhar al-Zaidi, the Iraqi journalist who threw his shoes at George W Bush in 2008, has slammed copycats of his famous protest, claiming that their efforts are flooding the market with cheap imitations and pushing down the value of a quality thrown shoe.

“With every missed pump or sandal, the overall effect of a well-aimed brogue diminishes,” he told The Pan-Arab Enquirer from Baghdad yesterday. “It’s basic supply-side economics.”

Al-Zaidi called on international groups to agree a set level of output to keep the market value of a tossed shoe buoyant. “Until then, the shoe-ing must stop.”

Al-Zaidi famously threw his shoes at George W Bush at a press conference in December 2008, a move that saw him become an instant international celebrity, and soon offered book contracts, record deals and reality television appearances. Since then, the shoe has become the weapon of choice for those wishing to display their feelings, with hundreds of pairs of footwear lobbed at politicians all across the world.

But according to al-Zaidi, the quality of the lobbing has decreased sharply since his original era-defining action.

“I realise I may not have hit George W Bush, may he burn in hell for all eternity, but at least I made him duck, which is a lot more than can be said for the jokers I’ve seen recently, who know nothing about grip or trajectory.”