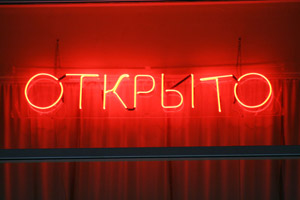 DUBAI: While the growth of Russia’s presence in the Middle East shows no sign of abating, regional businesses are struggling to keep up, and yesterday the Gulf’s once-booming signwriting business announced that supplies of Cyrillic lettering had run dry.

With the UK’s recent plunge into ‘double-dip’ recession plunging sterling’s international reputation into unchartered territories, many nightspots and hotels across the region have been removing references to Britishness – such as London, Ritzy and Grosvenor – from their names, reverting instead to “economically stable” Russian.

But the surge has resulted in a huge demand for Cyrillic neon signs, which has quickly overtaken supply.

“The problem is, with Armani Prive now renamed Классный and Club Cavalli going under the new working title of mmm – хороший, everyone wants a piece of it. From Leninskiproskept Traditional Moskva Fish and Chip to the new ComFrapp coffee shop at the Burj Khalifa, it’s taking over, and we simply don’t have the stock.”

And Oblussen claimed that the situation looks unlikely to improve soon due to developments in the Caucasus.

“Ordinarily we’d simply order in supplies from the CIS,” he explains. “But with Azerbaijan’s recent insistence on setting a new benchmark for crassness with the world’s biggest building, the Eurovision Song Contest finals, 12 Euro coffees in the Baku Hyatt and so on, they’ve pretty much got first dibs on everything neon, glowing and tasteless over that side.”

But while search for fresh supplies of Cyrillic letters continued, Oblussen indicated that the current European economic crisis was having an adverse affect on the stock of other languages.

“If anyone wants any Greek, we’ve got shed loads of that lying around.”