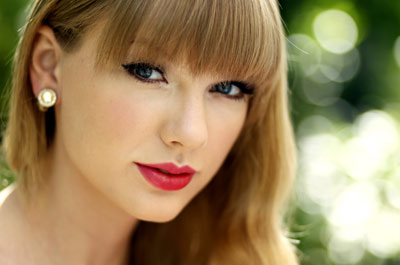 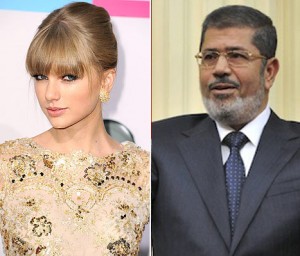 CAIRO: Following her split earlier this week from One Direction singer Harry Styles, eyewitnesses have confirmed that Taylor Swift has quickly moved on and the pop starlet is now reportedly dating Egyptian president Mohamed Morsi.

“Taylor and Morsi were seen holding hands behind the presidential palace in Cairo on Sunday afternoon, shortly after the Egyptian premier had overseen the reshuffling of his cabinet,” a reporter from TMZ wrote of the new relationship between the 23-year-old singer and 61-year-old politician, nicknaming the couple “Mift”.

“Later the two were spotted getting very cosy over dinner at a plush downtown restaurant, and Taylor was even seen getting into Morsi’s chauffeur-driven car afterwards. They couldn’t keep their hands off each other.”

Sources close to the star have hinted that Swift is considering buying a property in Cairo to be close to her new man. “She really thinks this could be the real deal,” one told the Perez Hilton celebrity gossip website. “They’re actually really cute together.”