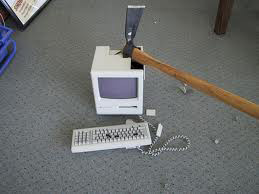 In what it claimed was “nothing but a shameless attempt to increase web traffic”, online news organ The Pan-Arabia Enquirer this morning revealed that it had been forced to destroy hard drives containing copies of several extremely sensitive documents.

“We can confirm that two Sinclair ZX Spectrums were destroyed,” acting editor Baltimore Stafford told reporters. “To be honest, there wasn’t anything on them save for a half-written story about an expat who fell over at a brunch. But if we mention NSA a few times and stick in some other topical hashtags, we’re confident we can get at least 10 or so more visitors to the website.”