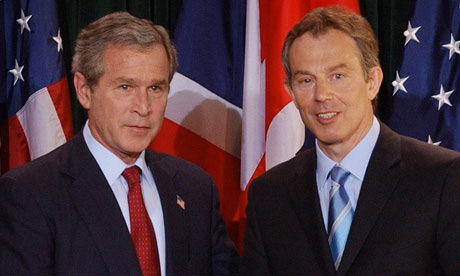 Citing their “outstanding efforts in preventing a world war in Syria,” the Nobel Committee this morning revealed that it would be awarding the 2013 Nobel Peace Prize to former US president George W Bush and former UK prime minister Tony Blair.

“These two statesmen have been absolutely instrumental in stopping the Syrian war from escalating into a terrifying global conflict and, for this, they must be congratulated,” said the organisation in a statement.

“Were it not for Bush and Blair’s disastrous and woefully misguided invasions of Afghanistan and Iraq, wars that led to the death or displacement of millions of innocent civilians and destabilised much of the world, Western armies would have charged headfirst into Syria with their eyes closed.”

Both Bush and Blair were also praised for their tireless work in building new platforms from which new generations of jihadists have been born, work that has been repeatedly referenced by those campaigning against military intervention in Syria.

“Their achievements really cannot be underestimated,” added the Nobel Foundation. “Had Bush and Blair’s wars not helped radicalise an already disillusioned youth and offer such outstanding recruitment tools for extremist groups like as al-Qaeda, politicians who have since stood up and opposed calls to drop bombs on Syria might well have believed it to be a good idea.”

Finally, the two former premiers were lauded for bringing the horrors of war into their own countries, a factor that has been vital in turning public opinion against launching another Middle East operation.

“Even today, well over a decade after the ‘War on Terror’ began, the death toll of UK and US military personnel engaged in these conflicts continues to rise. Such painful reminders of the costs of launching military action in an unstable and unpredictable region has arguably been the most pivotal influence in dissuading everyday people against attacking Syria,” the statement read.

“Bush and Blair may have long since left power, but the relentless and sometimes illegal manner in which they pushed to start these awful, costly wars – wars that have shown us how wars should not be fought – deserves applause.”

OPINION: Qatar should hold the World Cup in the height of summer
Middle East gamers thank regional censors for protecting them from horrors of GTA V
Advertisement