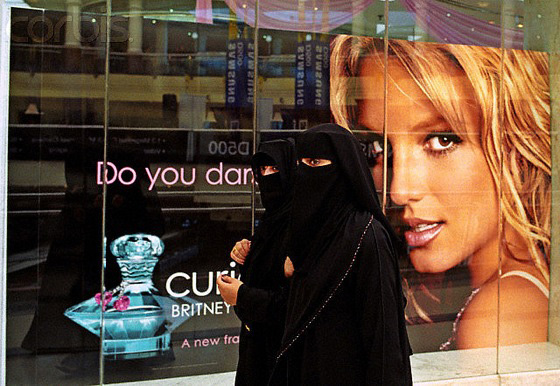 DUBAI: The international media has photographed the same two veiled women in front of lurid, tacky billboard adverts for the 17th time this week, the pair has reported.

“First it was Time magazine, then it was the Financial Times, then Reuters, Associated Press and the Guardian. I mean, frankly, I’m starting to think the whole thing is just one tired journalistic cliché,” said Almeera Al Suweidi as she was doing her shopping in Mall of the Emirates.

“Ok, I get it: it’s the modern versus the traditional,” said her friend, Fatima Al Mansouri. “But seriously, can’t we just go out without some guy with a camera jumping out from behind an indoor ski centre to take a picture of us going past a giant photo of Justin Beiber’s under arm spray or the latest underwear range from some Jersey Shore nobody?”

Moments after speaking to The Pan-Arabia Enquirer, our photographer snapped the pair as they walked by a sexually seductive poster for Curious, the branded Britney Spears perfume from Elizabeth Arden, before they stepped into Victoria’s Secret to browse the lingerie selection.