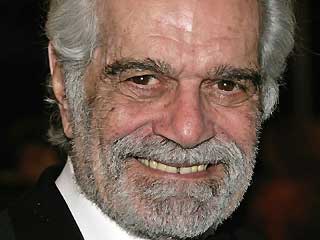 PARIS: There was chaos at the Cannes Film Festival last night after scenes of violence erupted at the world premiere of Omar Sharif biopic, The Iron Hand.

The film, which sees George Clooney play the iconic Egyptian actor, was being given the full gala treatment at the Palais des Festival, with a strong turn out from Hollywood A-listers.

But trouble arose from the man of the hour, Omar Sharif himself. Within minutes of arriving on the red carpet, the greying actor had managed to slap every female journalist in the press area.

“It was crazy,” an observer told The Pan-Arabia Enquirer. “He was just incensed. There were hands flying in all directions.”

Having slapped every single female journalist, Sharif is then said to have turned his attention towards Naomi Watts and Tilda Swinton, who were also walking down the red carpet, before security guards were able to step in.

According to reports, Sharif had been upset by the presence of Sacha Baron Cohen in Cannes. The actor, in town to promote his latest comedy The Dictator, had spent much of his time dressed as fictitious Arab dictator Admiral General Aladeen.

Sharif is no stranger to violence at film festivals. At the Doha Tribeca Film Festival last year he reportedly hit a female reporter while at the Berlinale in 1993 he was arrested after punching a monkey in the face.