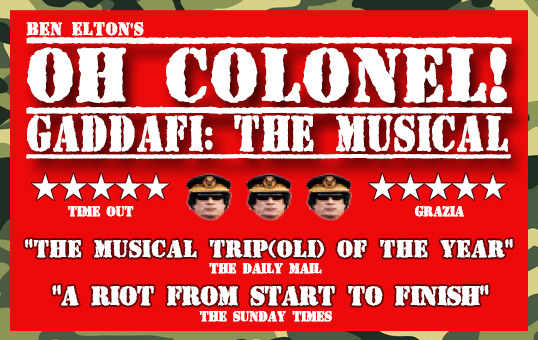 The poster for Oh Colonel!

LONDON: Critics have been unanimous in praise for Oh Colonel!, the new musical based on the life and times of the late Libyan leader Muammar Gaddafi, which had its debut on London’s West End last night.

Oh Colonel! was described as “a riotous romp right from the opening scene” by Time Out magazine, while The Guardian called it the “king of kings of musicals”.

Written by Ben Elton, the high-octane show features songs including ‘Muammar, He’ll Go Far’, ‘Oil Be Damned’, ‘The Jamahiriya Jam’, ‘Mad Dog Got The Blues’ and ‘Ben Ghazin’ In Your Eyes, It Made Me Want To Cry’, with a 30-strong dancing troupe made up of several members of Gaddafi’s own all-girl bodyguard unit.