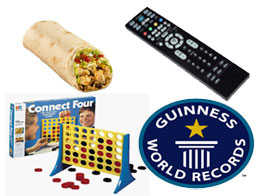 Some pictures relating to the story

DUBAI: Guinness World Record observers were said to be in agreement last night that the world’s most pointless world record had been broken in some mall or other in Dubai.

While nobody could recall exactly what the record was that was actually broken, eyewitnesses have confirmed that it was extraordinarily inane.

“It was either the world’s biggest chicken burrito or world’s longest remote control,” said Cindy Watermelon, who was at the unveiling ceremony at the Happy Plaza Mall or Deira Discount Shopping Centre or something.

“Whichever it was, it was the most useless thing I’ve ever seen. Oh, perhaps it was the world’s biggest game of Connect 4, I don’t really remember.”

Organisers of the event said they were delighted at the response, and that it had helped boost footfall at the Sunshine Downtown Consumer Park or Uptown Springs Village Market or whatever by around 10 per cent.

“We’ll definitely do something again next year,” said Mariam Musandam-Cruise, head of the events committee. “Maybe we’ll do the world’s tallest book of children’s recipes or world’s most expensive set of spanners.”