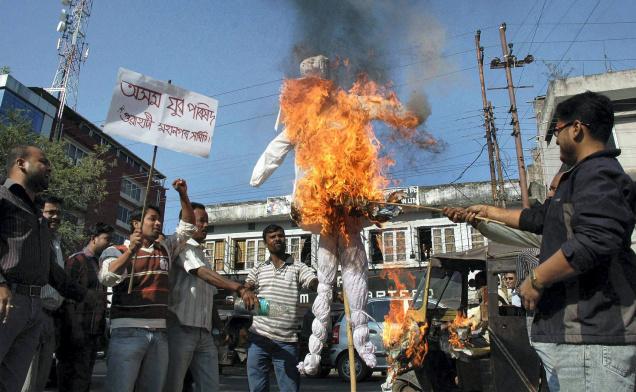 An effigy buring in India yesterday

SANA’A: Taking advantage of the recent protests in the Yemeni capital, an enterprising group of students are staging what they hope will be a Guinness World Record beating event. Should everything goes to plan, tomorrow afternoon will see the world’s biggest effigy burning take place in the grounds of Sana’a Polytechnic, with officials having flown in especially to oversee the spectacle.

“We saw what was going on here earlier, and were saddened by the lack of effigies being burned,” said event organiser Guy Forks, a second year media studies student. “We’re really hoping that if we manage to take the record it will help promote this wonderful practice across the Middle East.”

The current record for the world’s biggest effigy set aflame is held by India, where in 2002 a 15.45-metre tall wooden statue of some cricketer who underperformed in a test match was reduced to ashes in the city of Chennai.

“India and Pakistan have always been the standard bearers when it comes to effigy burning,” admits Forks. “Although last year we saw Gaddafi’s effigy set ablaze in Libya, it’s something that has never really caught on in the Arab world.”

Forks said that the size of the effigy to be burned in Sana’a, and the individual it would be modelled on, was to remain a closely guarded secret until the event itself.

According to Guinness’ strict guidelines, for an effigy burning to qualify for world record assessment, it must remain at least 75 per cent intact for the first 90 seconds of burning.

“Obviously, there’s the risk that our effigy will collapse instantly and we’ll be disqualified,” said Forks. “In that case, we’ll just set fire to an effigy of the Guinness World Records,” he laughed.