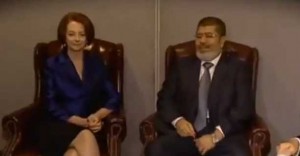 A photograph of the alleged incident taken in September 2012

CAIRO: With the list of criminal accusations against Mohamed Morsi growing each day, it has now emerged that the deposed Egyptian president is set to be formally charged with gross misconduct.

According to judicial sources, the ousted leader will be charged with “adjusting one’s privates in public” following an incident that occurred while meeting former Australian prime minister Julia Gillard in September last year.

“If you’ve got to give them a quick rearrange while outside, there’s an unwritten one second rule that [Morsi] woefully ignored,” said an insider. “And, although this doesn’t apply to many people, you’re kind of expected to avoid doing it in front of a world leader and a load of TV cameras.”